RDM utilizes a Transaction File Server (TFS) to access the files that comprise a user database. The TFS is a set of functions called by the RDM runtime library to manage the sharing of database files among one or more runtime library instances. In a multi-user configuration, the TFS functions are wrapped into a server process called TFServer. To connect to a particular TFServer process, the runtime library needs to know the domain name of the computer on which TFServer is running, and the port on which it is listening, for example, “tfs.raima.com:21553”. Standard TCP/IP can be used to make the connection, whether the runtime library and TFServer are on the same computer or different computers (when on the same computer, optimizations are made, and a shared-memory protocol is available by default).

A TFServer should be considered a “database controller” in much the same way as a disk is managed by a disk controller. A TFS is initialized with a root directory in which are stored all files managed by the TFS. If one computer has multiple disk controllers, it is recommended that one TFServer is assigned to each controller. This facilitates parallelism on one computer, especially when multiple CPU cores are also present.
RDM comes with three different types of TFS implementations and allows the developer to choose the one that works best for the application space

A developer can limit access to a database by utilizing an in-process embedded TFS. As long as the application does not start the RPC listening threads the databases hosted by the in-process TFS will only be available to the process that started and initialized the TFS. 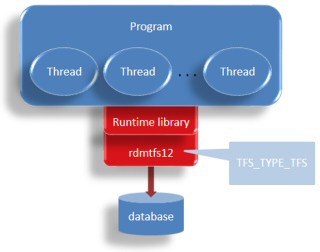 Access to a database by multiple processes is allowed by the remote TFS. The runtime library will connect to the remote TFS using a Raima connection URL syntax (tfs-tcp://host:port, tfs-shm://tfsname). The remote TFS can either by the tfserver executable shipped by Raima or it can be a developer TFST application that starts the RPC listening threads. If a developer wants to limit database access to a single machine they can initialize the shared memory transport, but not make the TCP/IP transport available. 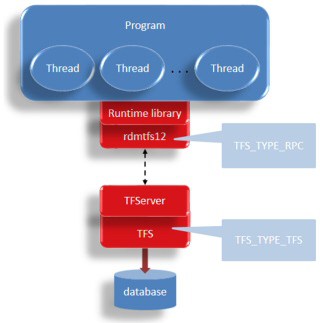